2011 started off with fireworks and an inspiring time in the forest. I (finally) managed to spend a longer period with the Baka, and it was amazing to learn about their way of life. Travelling around Gabon was, in general, a very different experience from the first time. Having been here for nearly three months, I have adapted to the climate and culture, know how to handle most situations, and had friends or at least people I knew greeting me at the different stops en route. Arriving in the village was also different, as one of the Baka men, Alain, came to pick me up in town and we travelled to his village with his family and some other Baka men.

I put up my hamoc in Alain’s house, which I shared with up to 12 others, and so there was always something going on – to enjoy, observe and document. I continued working on a map of the village and collecting genealogical data, which was best when everybody started getting involved. The most exciting thing was going dam fishing with the women, which is a traditional practice during the dry season. The principle is simple: pick a spot in the river; build a damn out of branches and mud; and start moving water out of one area to other side of dam (it would be impossible to do this in the rainy season when there is a strong current and water flow).

Moving the water from one side to the other

The fish hide in the mud, so you start moving the mud, sifting through each small area, catching the fish in the process. That part is not as easy as it sounds, and plenty of slippery fish wriggled free from my hands. Luckily dinner didn’t depend on my skill, and the other women were fast enough to catch them again. The average fish was about 10-15 cm long, and you kill them by (gently) squeezing the sides of the head. It’s not as gruesome as it sounds, and I was chuffed when I actually managed this without letting the fish go. All this was hard physical work, and our catch was equally divided between the women who had taken part in the dam fishing. I ate lots of fresh fish, antilope, and elephant meat whilst in the village, but that night the fish seemed to taste particularly good. 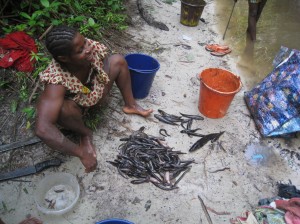 Angelique sharing out the spoils

Walking through the jungle forest, I have also been discovering some of the different plants and saw many animal tracks, but no big animals yet. During my time with the Baka, we danced on two nights. The first time was a mix of ‘traditional’ elements and something I would call ‘Baka capoeira’ which was just so much fun. The second time was with the Baka’s most important spirit: Edzengui. It is common practice that the children prepare Edzengui’s clothes and as a foreigner I was allowed to join in, and I learnt how to make his dress from raffia palm leaves. Baka dance (rituals) are incomplete without the polyphonic singing of the women. This type of music sounds strange to our ears at first, but this unique quality is also mesmerising and I cannot wait to go back and hear and learn more. 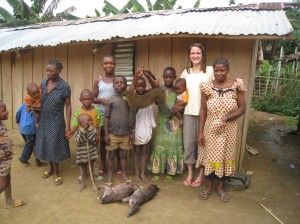 A quick photo during preparations for the New Year’s feast